Out of fuel and how to remedy

The DAF T244 is equipped with a 135 litre steel tank (3 in diagram below) which after 10+ years is bound to rust. A fuel line runs from the tank to the fuel sedimenter which allows particles (like rust) to drop to the bottom. There are reports that some buyers have found the sedimenter (4)  bypassed by the MOD, later we'll see why this is inadvisable. Another fuel line runs from the sedimenter (4) to the lift pump (5). All the lines up to the lift pump operate under suction and if a leak develops in them (at the push-fit connections) diesel will not come out, but air will be sucked into the fuel system, impacting performance and possibly stranding the vehicle. From the lift-pump (5) a steel line runs to the fuel filter (6) then to the injection pump (7). Both of these lines are under positive pressure. 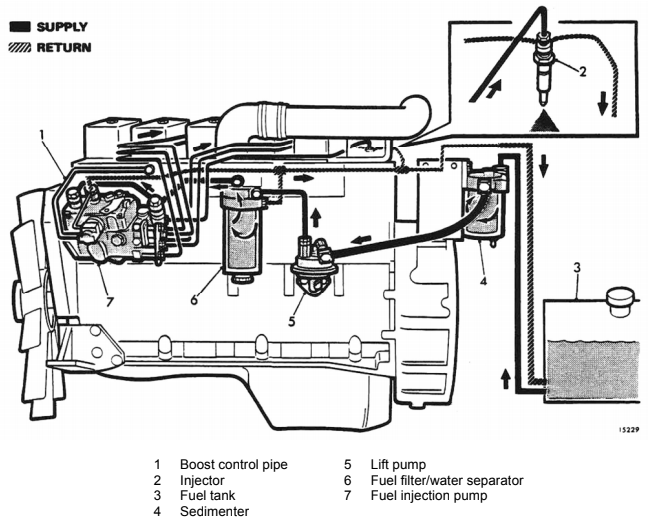 Taken from the user manual made available by the MOD.

After 10+ years the steel tank is bound to rust and the rust particles will make their way into the sedimenter. Undoing the banjo bolt on the bottom might yield clear diesel but that doesn't mean the sedimenter is not full of rust. I found this out the hard way.

In my case the sedimenter was so full of rust that it was impeding fuel flow. If you buy one of these and haven't replaced the fuel tank and line, it's advisable to check the sedminter regularly.
At the same time, I also replaced the fuel filter as, with that much rust in the sedimenter it's guaranteed that the fuel filter is clogged. I will be replacing the smaller 135 litre tank with a larger 168 litre or 200 litre tank and when I do, I'll change the fuel lines to rubber hoses to avoid the awful push-fit connections. 168 litres + 2 jerry cans should give a 600 mile range, which is more than enough for us.

Symptoms of a dry fuel system

One way to check is to pump the manual lever on the fuel lift pump a few times. If you can't feel any resistance then the fuel line is probably full of air. Make sure the lift pump isn't sitting on the cam by flicking the ignition slightly to turn the engine. If there is still no  To double check, unscrew the wing bolt on the bottom of the fuel sedimenter (4 on the diagram below). This can be found at the back (south) end of the engine. Hold a small container under this and unscrew a few turns, if no fuel comes out, then you're out of fuel.